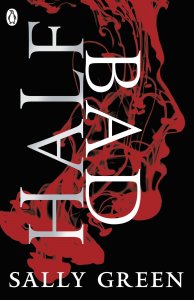 When you hear that a book is about teenage witch living in England you assume it is going to be like Harry Potter, right? Well that is what is what I thought when I picked up Half Bad and I couldn’t have been more wrong.

Half Bad is the first book in the Half Life trilogy by Sally Green. It tells the story of Nathan, a teenage witch who is half white witch and half black witch and his struggle for survival in the hidden world of witches. After being trapped and abused for his half black witch heritage he escapes and starts a quest to unlock his magical abilities. He has to complete his mission before his seventeenth birthday or he will die.

It is difficult to explain my feelings for Half Bad. I loved this book but I cant say that I enjoyed it, that is mainly because it is full of torture and violence. There is nothing happy in this book at all. Nathan’s life is horrible in every possible way. I have no problem with torture or violence but you cant say you enjoy it or you sound like a sadist.

The best thing about this book is how it is written. It occasionally jumps to a second person narrative which is really unique and does a fantastic job at drawing in the reader and force them to experience the events in the novel for themselves. It’s amazing what a difference the second person narrative can make, it can force you to feel like you are really there. It can make you cringe with pain or feel the nerves and other emotions coming from the actual character in the story. I think more writers need to explore writing in the second person because I feel like it is something that could be used more.

I would highly recommend Half Bad to anyone who likes a bit of action mixed with their magic. The next book in the series, Half Wild, will be released on the 25th of March 2015 and I am really looking forward to it. I will definitely be picking it up when it comes out because I need to know how this story progresses.

I gave Half Bad 4 out of 5 stars on GoodReads.

1 thought on “Half Bad by Sally Green”