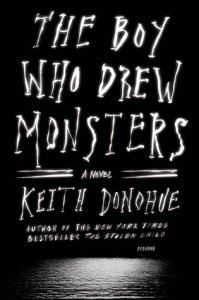 Ever since he nearly drowned in the ocean three years earlier, ten-year-old Jack Peter Keenan has been deathly afraid to venture outdoors. Refusing to leave his home in a small coastal town in Maine, Jack Peter spends his time drawing monsters. When those drawings take on a life of their own, no one is safe from the terror they inspire. His mother, Holly, begins to hear strange sounds in the night coming from the ocean, and she seeks answers from the local Catholic priest and his Japanese housekeeper, who fill her head with stories of shipwrecks and ghosts. His father, Tim, wanders the beach, frantically searching for a strange apparition running wild in the dunes. And the boy’s only friend, Nick, becomes helplessly entangled in the eerie power of the drawings. While those around Jack Peter are haunted by what they think they see, only he knows the truth behind the frightful occurrences as the outside world encroaches upon them all.

Spectacularly dark and spooky, The Boy Who Drew Monsters is a wild horror ride wrapped up in only 200+ pages.

I picked up this book on a whim. I needed something short to read and was drawn to this novel’s creepy, simplistic cover, and I was not disappointed. I can honestly say that this is probably one of the best horror novels that I have read in a long time. The best thing about it was the pacing. It had the pacing of a horror film with frightening things popping up every chapter or two and every scene added to the story.

Another interesting element to this novel is that the main character suffers from autism so you get to see into the life of an autistic child with agoraphobia and the effects his condition has on his family and friends. The other characters in the book are your pretty basic family tropes you see in most horror things; the dad who just wants things to be normal and doesn’t believe in anything and the mum who sets out to find all of the answers. But even though they are character tropes that you see in everything they work for a reason. Though I would like to see the roles reversed in a book just for fun.

Horror wise this novel was perfectly chilling. Anything involving children is automatically 10 times scarier than a horror novel about adults. The monsters are very creative and not like anything I had seen before, especially the baby army. But I will say no more about that because I don’t want to spoil anything.

If you want a straight to the point horror novel with lots of creepy monsters this is the book for you. Some events in the book take place over Christmas and New Year so I suppose it could be a winter read if you really wanted it to be. I am unsure of what age rating to give this novel. It has a few sexual scenes and bad language, but I have seen worse, so if you think you can handle those things then you should be fine with this novel.

There are also whispers of a film potentially being made so if you like to jump on bandwagons  before they get rolling, this is your chance.

I gave this book 5 out of 5 stars on GoodReads.com because I loved it. Personally it did not scare me because I am notoriously difficult to scare, but this book ticked all my enjoyment boxes for a horror novel. Creepy child themes: check. Unique monsters: Check. Good twists: Check. I will be recommending this book to people for a while.

I am always on the hunt for a novel that actually frightens me so if you have any books that might successfully scare me feel free to let me know.

As always feel free to follow me on GoodReads and if you have read The Boy Who Drew Monsters let me know what you thought of it below.

4 thoughts on “REVIEW: The Boy Who Drew Monsters by Keith Donohue”