It was so difficult to choose my favourite books for this year. I read a grand total of 75 books, which is a lot of books for me, so it made picking out the best of the best a little difficult.

None of these books were released this year and one of them is a classic novel. But books don’t disappear after they have been released for a few years. You can still blog about them and classics are classics for a reason.

So here are my favourite reads of 2016 in no particular order.

City of Thieves by David Benioff

Quirky, dark and full of humor. I loved City of Thieves. I normally don’t read war novels but I heard so many good things about this book that I had to pick it up when I found a cheap secondhand copy for sale, and I am glad I did.

This book is about two prisoners during the Siege of Leningrad who are tasked with trying to find eggs for a wedding. If they succeed they get their freedom, and if they fail they will be killed.

I wasn’t expecting a war novel to be as fun as this one was and it is set during a location that you rarely hear about when you read about World War II so it had me opening wikipedia to give myself a bit of a history lesson because I had never heard of things like anti tank dogs before. I will warn you though, this book has some adult subject matter, such as sexual scenes and violence.

The Boy Who Drew Monsters by Keith Donohue

Another book I picked up on a whim that made it to my favourite reads list. I actually listened to this novel via audiobook and I picked it at random from the library because it had a spooky cover and I desperately needed an audiobook to listen to at work. That whim worked out brilliantly.

The Boy Who Drew Monsters is about a young boy with autism who likes to draw but one day his drawings start to come to life.

This is probably one of the best horror novels I have read in a long time. It had the quick pacing of a horror film and it didn’t pad itself out with too much talk and explanation like some horror novels do. It has plenty of creepy moments and no shortage of monsters. It can be a bit trope-y in parts but if you are in the mood for a horror film in book form you need to check this out. You can read my full review here. 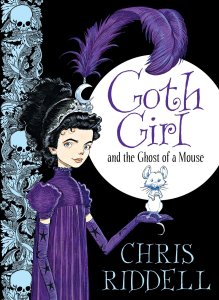 Yes these are children’s books, but they are amazing. I cant recommend this series to enough people. It is beautifully illustrated and generally a ton of fun to read.

Goth Girl is about Lady Ada Goth and her adventures in her big Gothic Victorian house. She has a vampire, fencing, governess and Frankenstein’s Monster lives in her fridge. How could you not enjoy that?

I think this book would be perfect for any 8+ year old who loves dark things and fun characters, or for adults who want an easy read and a good laugh at sneaky pop culture and literature jokes that would go over a child’s head.

You can check out my full review of the first book here.

War of the Worlds by HG Wells

I was not expecting to love this book as much as I did. I was just trying to find classics to read for my challenge and this was a very short read. It ended up turning me into a HG Wells junkie for the rest of the year.

I cant rant about this book enough. Yes, it is just about aliens invading earth and killing everyone, but when you remember that this book was written in 1898 it blows your mind. This started the alien invasion genre.

I also loved that this book follows a regular person. There are no heroes in War of the Worlds. It is just one guy who is desperately trying to survive and sharing the events that he witnesses first hand. If you haven’t read this yet you need to.

Let the Right One In by John Ajvide Lindqvist

I generally like to avoid anything to do with the vampire genre. Twilight killed it and prompted dozens of copycat bad vampire novels. So it was safe to say that I surprised myself by buying a vampire novel. I had heard so many good things about this book that when I saw it on sale I picked it up on a whim.

Let The Right One In is about a small boy who makes friends with a little girl who has recently moved into his street. The problem is that she can only come out to play at night and strange murders have started happening around town since she moved in.

This book was everything I wanted from a vampire novel. It was gruesome, dark, bloody and threatening. Also horror novels get better if they have creepy child themes. This isn’t a book for the fainthearted though. It contains references to pedophilia, has sexual scenes and is very bloody. You can read my full review here.

As always feel free to follow me on GoodReads and let me know below what was the best book you have read this year.