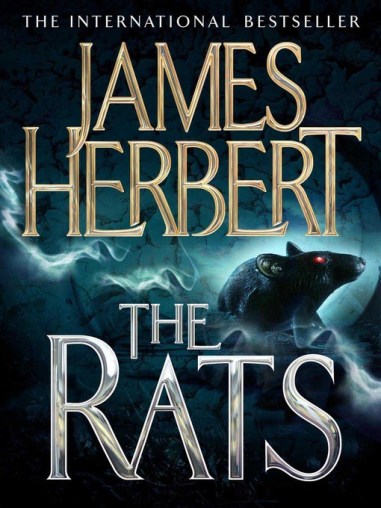 “It was only when the bones of the first devoured victims were discovered that the true nature and power of these swarming black creatures — with their razor sharp teeth and the taste for human blood — began to be realized by a panic-stricken city. For millions of years, man and rat had been natural enemies. But now for the first time — suddenly, shockingly, horribly — the balance of power had shifted…”

This is a very silly book full of very silly things.
Rats by James Herbert is a special kind of book beast. It’s gory, violent and is very much enjoying being gory and violent. This book received a lot of horrified reviews when it first came out but it ended up being a cult classic over the years, launching the writer’s career and making a name for itself as one of the best horror novels of all time. So when mentioned to people I was reading Haunted by James Herbert everyone kept referring to him as “the rat guy”. I had no idea what they meant so after I read and loved Haunted I decided to track down Rats.

This book is so odd that I have a hard time forming an opinion of it. I enjoyed reading it, and it is wonderfully written, but I am not sure that I enjoyed it for the entertainment factor or if it was like watching a car crash. It was so unpleasant in parts I couldn’t look away. I have read plenty of violent and gory books over the years but this is probably one of the most horrifying. Several scenes in this are probably up there with a few scenes from American Psycho when it comes to unpleasant gore.

Saying all that though, I had a good time reading it. I flew through it and found it difficult to put down at times. There is something enjoyable about how open it is about being silly. It is very aware that it is a book about rats going on a rampage. I am a big fan of the short story The Birds, so naturally this book reminded me of that. The only real difference being that people like birds, no one wants to be around rats let alone eaten by them.

I think this book would be a great read if you wanted to just turn your brain off and soak up some mindless gore and violence for a day or two. This book is a cult classic for a reason. I think it is great to read books that pushed boundaries for their time and dared to make people uncomfortable.